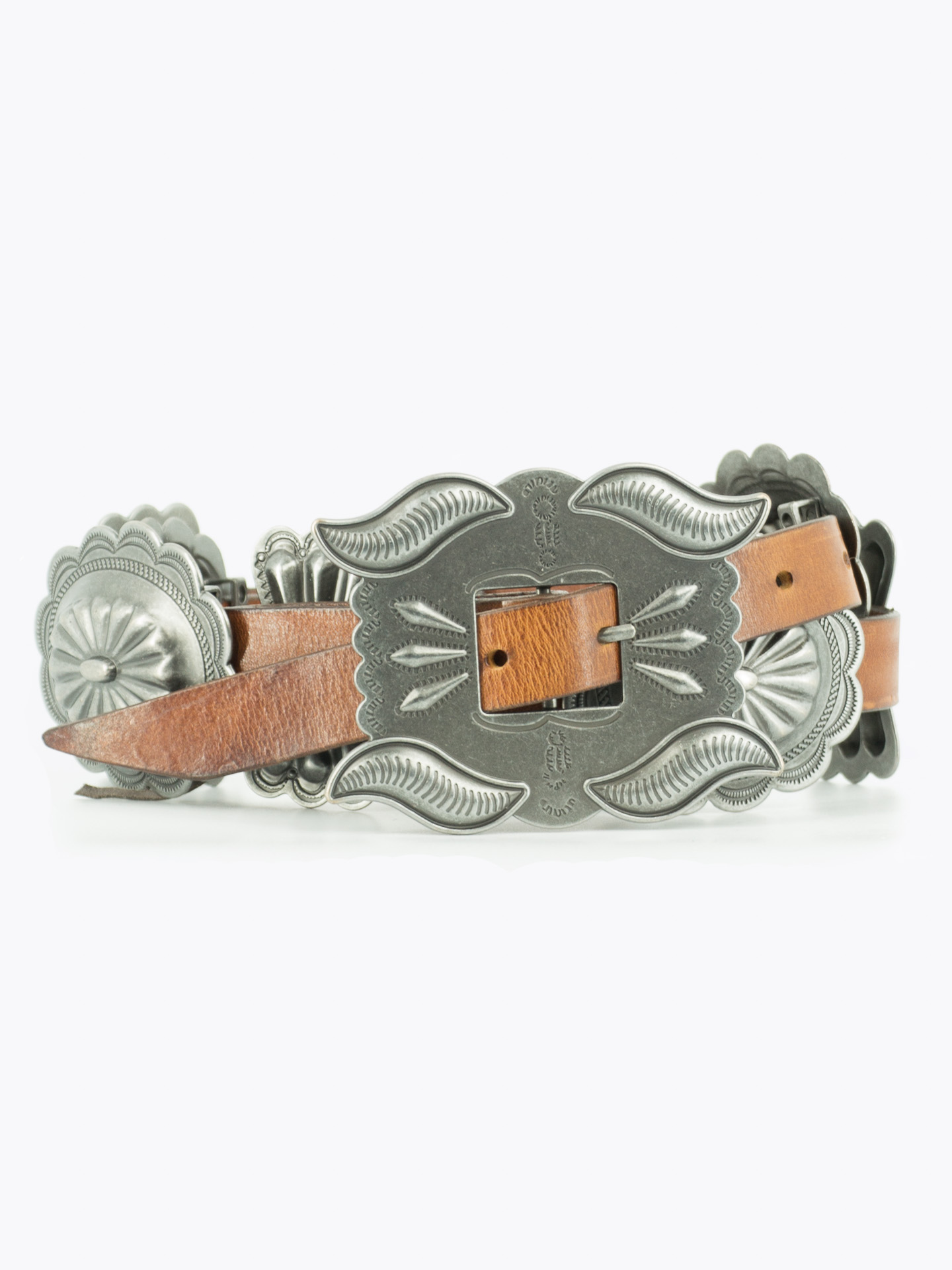 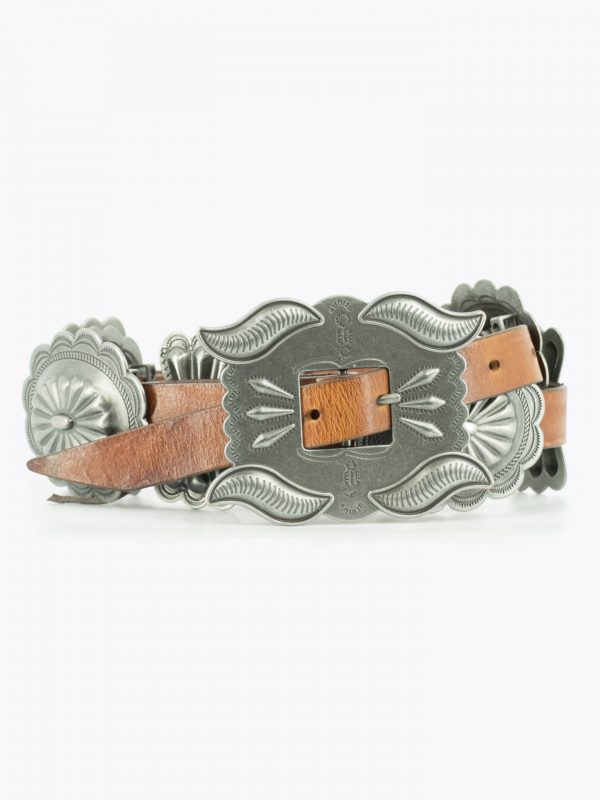 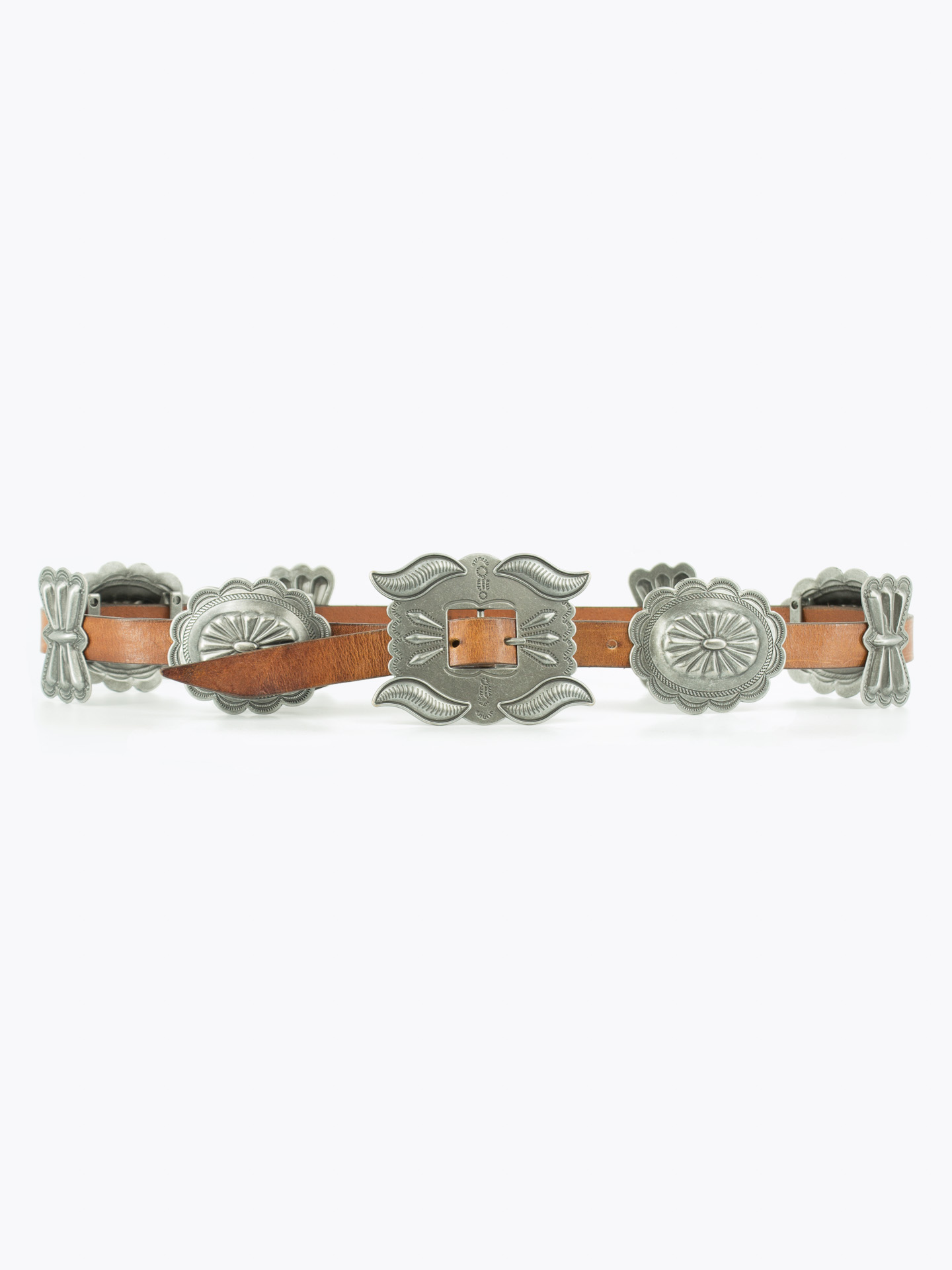 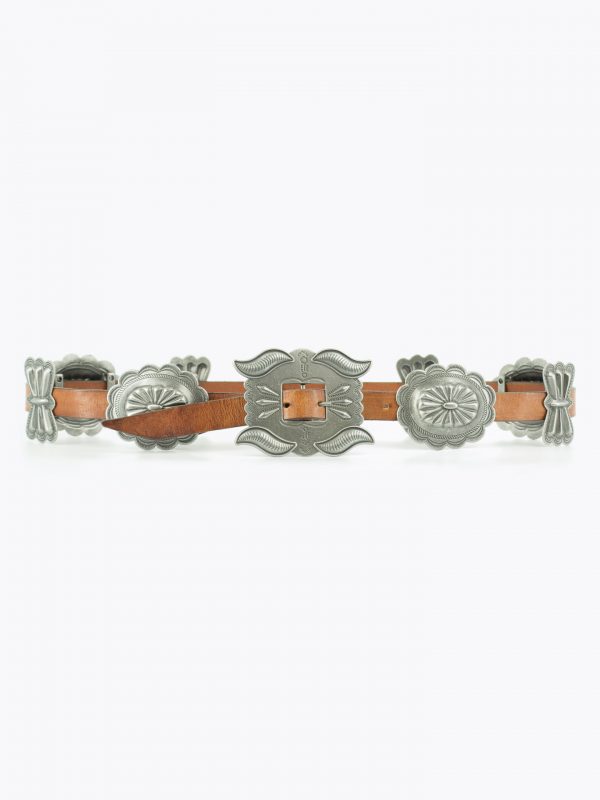 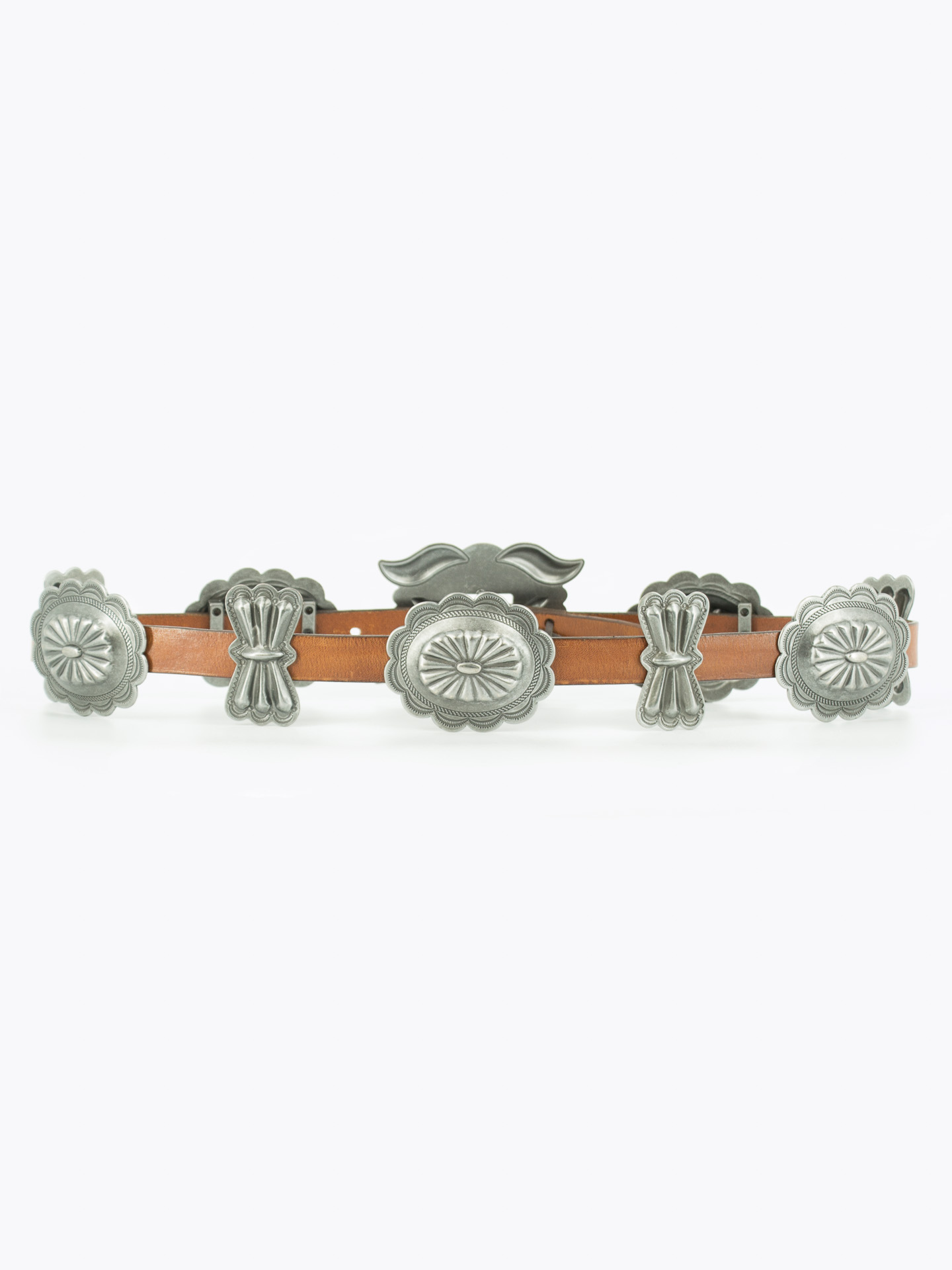 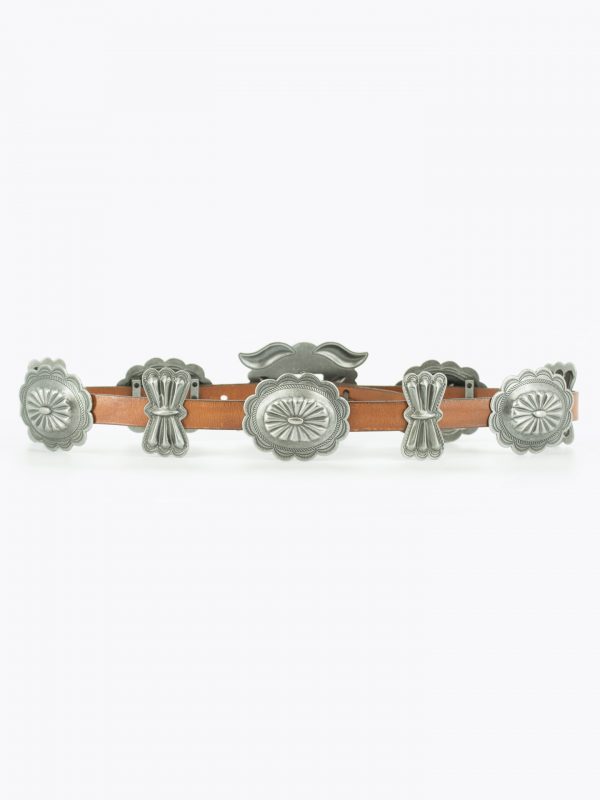 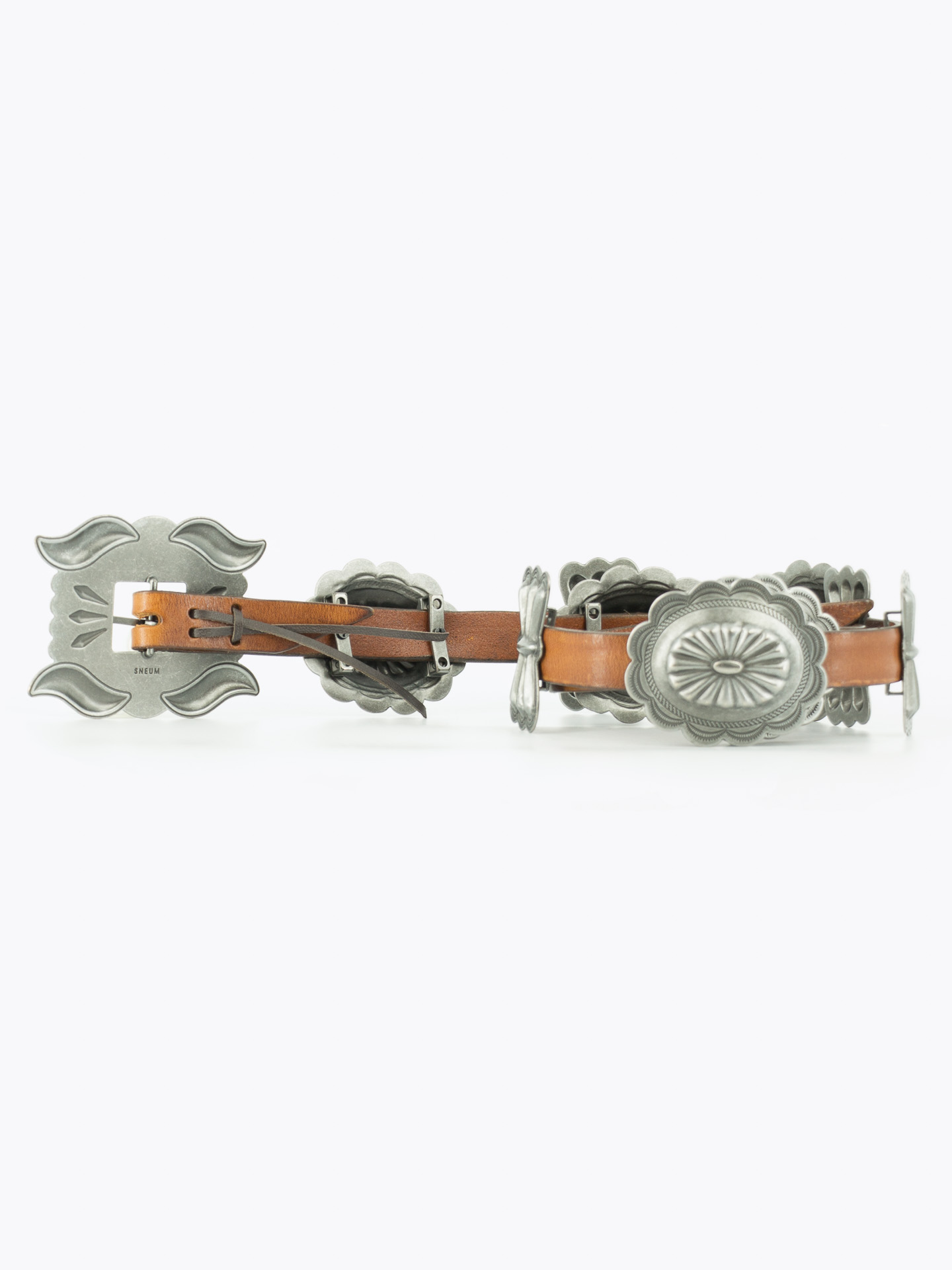 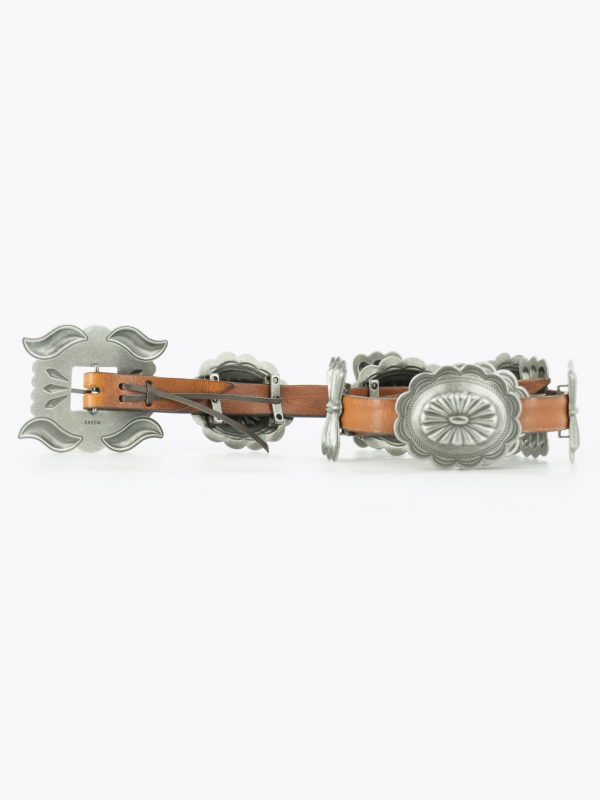 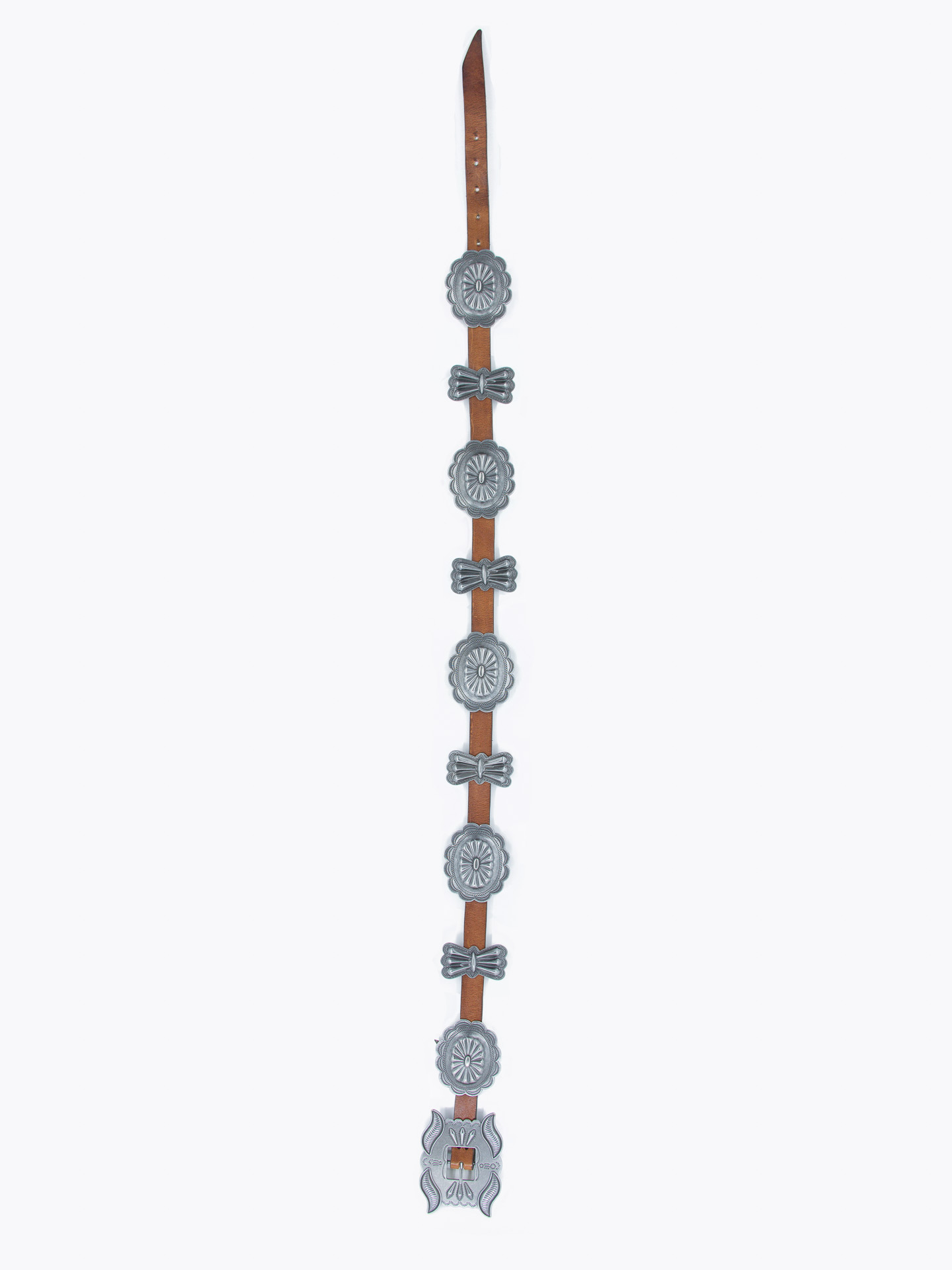 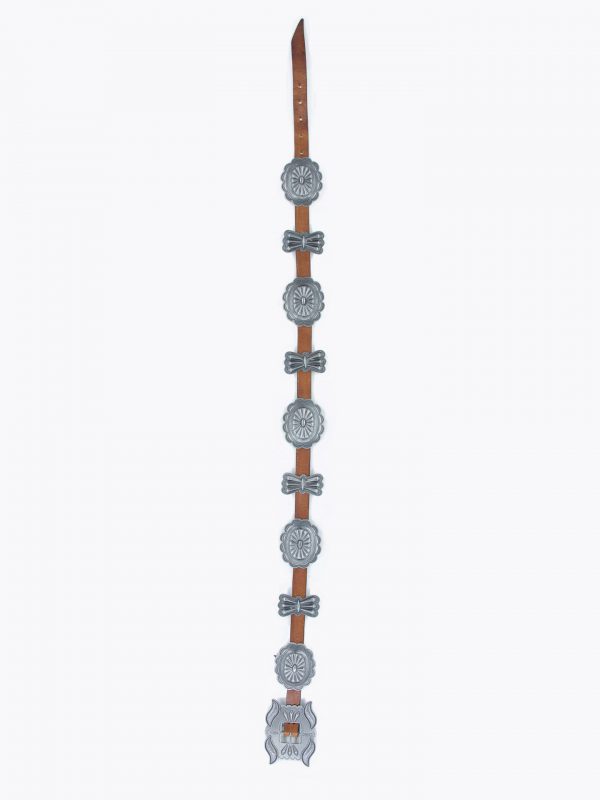 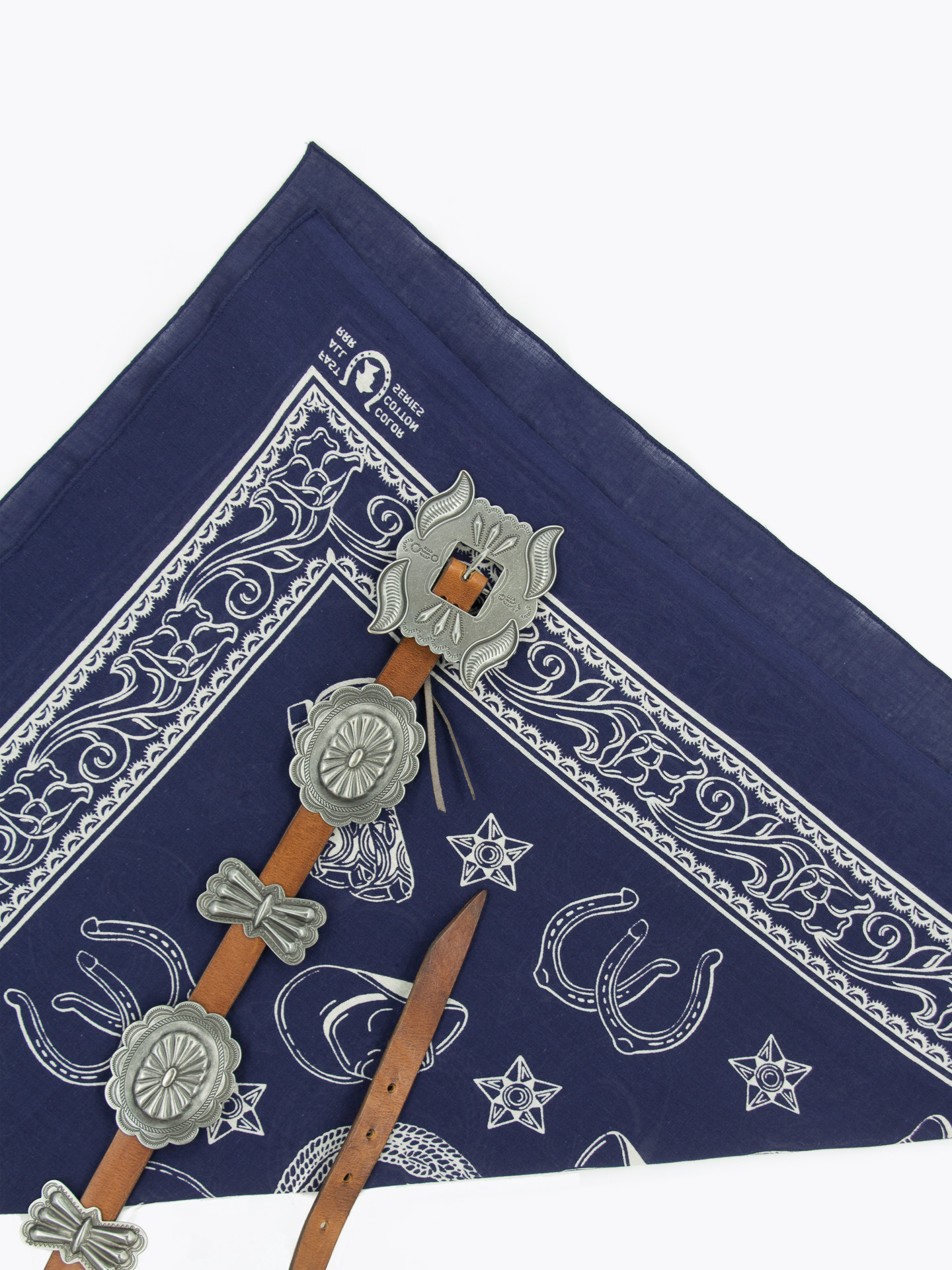 The Sneum RRR Concho Leather Belt is inspired by those worn and made by Navajo Native Americans of the Southwest. Our version is based on what would be classified as a Phase III belt  from around the 1930s and features five large oval conchos and four large butterfly conchos with combination of repoussé and stamping. The large main buckle has been given the iconic embossed leaf-shapes that are further emphasized by covering their surfaces with stamped impressions. Both the conchos and main buckle are silver-plated, custom stamped, that will develop a natural patina with age. Likewise they are removable and can be made in to a “regular” belt according to preferences. Hand made in England, the belt strap has been vegetable-tanned and been given a unique treatment to obtain an aged look which is an intentional feature of the belt and no two straps are completely alike. In addition the strap fastens around the buckle using leather string just like the old original concho belt straps.

The word concho, sometimes spelled concha, comes from the Spanish word meaning shell. Some of the first “conchos” were made of melted silver dollars and resembled a shell—it is commonly thought this is how the name came about. In Spanish, the correct word is concha, with an a at the end and is pronounced like an ah sound. However, most people now-a-days refer to the Native American style belt as a concho belt, with an o.

Although it is commonly said the Navajo (Dine’) borrowed the idea from Spaniards, the Concho Belt has become a long-standing Native tradition. Concho Belts reportedly began appearing in Navajo country in the late 1860s or early 1870s. Other Native Americans including the Zuni and Hopi also made traditional Concho Belts before long.

The basic form of the concha (shell) was derived from hair ornaments of the Southern Plains Indians, called hair plates. Hair plates were usually round, undecorated, and with smooth edges. They were strung vertically on red trade cloth, horse hair, or leather. Men would wear this stripe of adornment in their hair and women would wear them as belts, sometimes reaching six feet long. They were made from German Silver, Copper, and Brass.

The Navajos owned concha belts long before they learned silversmithing. They obtained them from the Southern Plains Indians, through looting or trade. The concept of the concha belt began with the Plains Indian's belts but was blended with early Spanish/Mexican concha designs (1700 - 1750 CE). These early designs originated from iron harness buckles and cast silver conchas with scalloped edges used for spurs.

First Phase (late 1860s to 1880)
he first Southwest American Indian concha belt was attributed to a Navajo named Arsidi Chon (Ugly Smith). It was hammered from Mexican silver pesos in 1868 or 1869. The earliest conchas were round, light silver with diamond-shaped slots and a center bar where the leather belt was laced through. This was because Navajos had not yet learned soldering techniques at that time. The edges were scalloped with round decorative holes punched inside the scalloped edge. This style became known as First Phase Concha Belts and lasted from the late 1860s to 1880.

Beginning in the 1880s through the 1890s, trade increased for improved tools and stamps, allowing for conchas to become more elaborate. They used cold chisels, files, punches, stamps, and repoussé techniques.

Second phase (c. 1890s – early 1900)
In the second phase of concho belt development, the silversmith had began to solder. He now soldered a silver, or later a copper, strap or bar across the back of a concho to run the leather belt through (more often silver in those early years). This allowed for the entire face of the concho to be decorated and kept the leather belt on the backside of the concho. The second phase is generally thought of as being durning the years of the 1890s through early 1900s.

Third Phase (early 1900s - 1930s)
In the last or “Third Phase” of concho belt development, you started to see the “butterfly” appear between conchos and also the use of turquoise as an adornment on the face of a concho. A “butterfly” is simply another smaller concho in between the bigger conchos and its shape somewhat resembles that of a butterfly (a bow shape). Copper for the strap across the back becomes more prevalent than a silver bar as you go further on in time also. A belt with butterflies (and sometimes turquoise) from the early 1900s through the 1930s is generally thought of as “early third phase” and a belt from the 1940s through 70s (or so) would often be referred to as “vintage” while anything newer would be modern to contemporary.

The timelines listed above are general and may differ slightly depending upon who you ask. Natives first had Concho Belts for personal use only, but around the turn of the last century, tourist demand had kicked in and a new outlet for the belts emerged. This is when you started seeing them produced in larger numbers and is also why a belt produced after 1900 is much easier to find than one from the late 1800s.

Today, thousands of belts are produced annually by Natives and non-Natives alike. Typically, genuine “Native” handmade belts are more sought after by collectors and discerning jewelry buyers. The belts are generally considered unisex and can be worn by both men and women.